Living Our CLC Way of Life in the Time of Pandemic 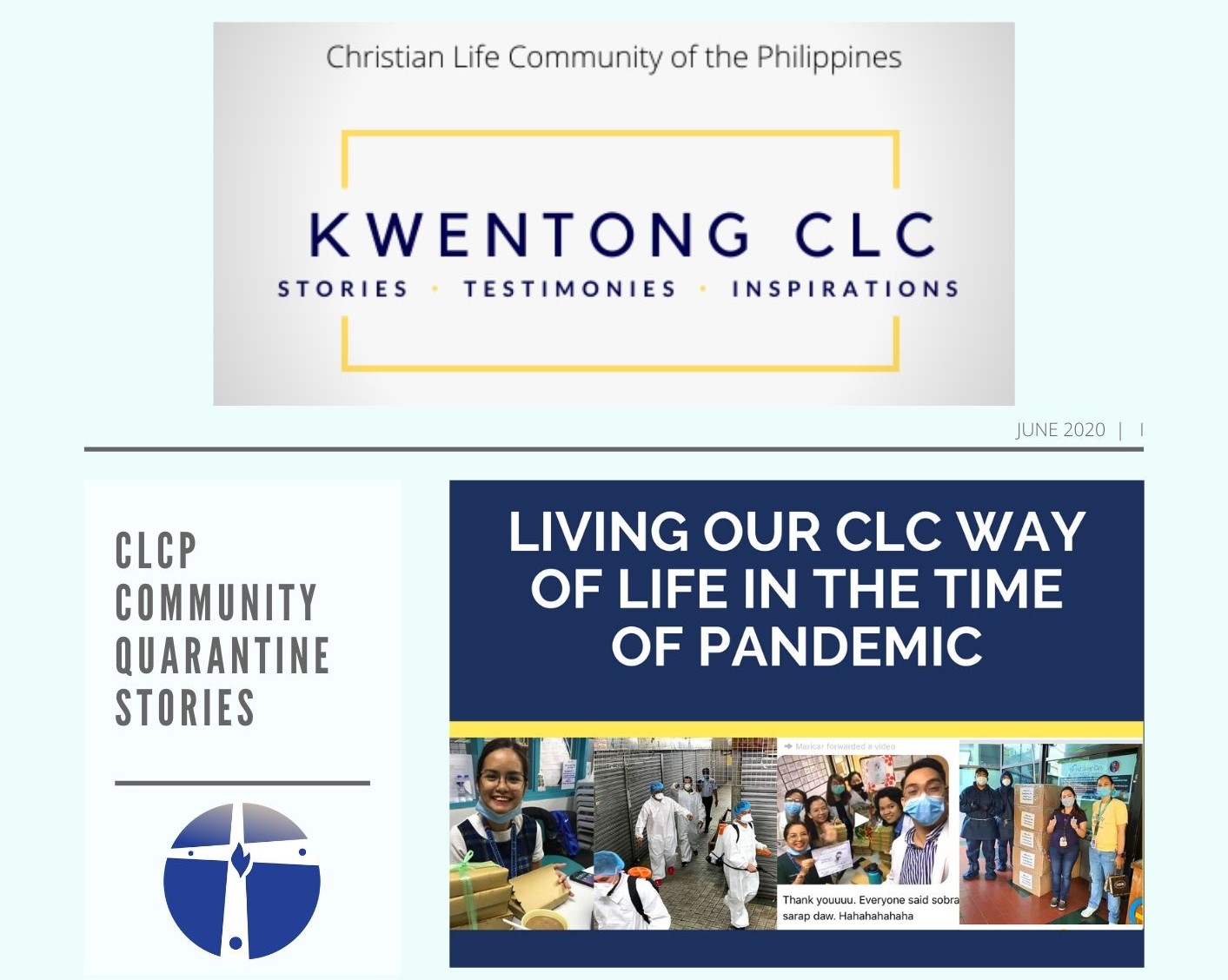 "PURPOSE. Our Community is made up of Christians... who want to follow Jesus Christ more closely and work with him for the building of the Kingdom..." (GP #4)

"SENSE OF THE CHURCH. By making ourselves sensitive to the signs of the times and movements of the Spirit, we will be better able to encounter Christ in all persons and in all situations...This sense of the Church impels us to creative and concrete collaboration for the work of advancing the reign of God on earth, and includes a readiness to go and serve where the needs of the Church so demand." (GP #6)

"APOSTOLIC LIFE ... we have received from Christ the mission of being his witnesses before all people by our attitudes, words and actions, becoming identified with his mission of bringing the good news to the poor, proclaiming liberty to captives and to the blind new sight, setting the downtrodden free and proclaiming the Lord's year of favour." (GP #8)

-- excerpts from General Principles of the Christian Life Community

To say that we live in extraordinary times is to state the obvious. And while we Filipinos are no strangers to extraordinary times of adversity, this one is a little different. The COVID 19 pandemic has brought not just the Philippines, but virtually the entire world to its knees, and the normal course of everyday life to a standstill. The SARS-Cov-2 virus is an unseen enemy, and it does not discriminate among classes, genders, ethnicities; indeed, it is an equal-opportunity affliction.
However, in an unequal society such as ours, some people are more affected than others. While there are those stuck inside their homes, miss eating in restaurants, yet are able to still enjoy their favorite meals by having these delivered, there are many who, unable to go out to earn a living, are forced to wait for promised hand-outs that may or may not arrive. While there are those who have secured (horded?) their supply of alcohol and flaunt their designer masks on social media, there are healthcare workers who are in the battle of their lives, not knowing when their dwindling supply of PPEs will last. While there are those who are allowed to work in the comfort and safety of their own homes, there are those whose means of earning a living necessitates that they risk their health by being present in their workplace.
Yet in the middle of this crisis, Easter happened, shining the light of hope that penetrates the darkness.
Two CLCers who reflect this shining light are Aly Yap and Elyse Go. Both Aly and Elyse are members of Pyros community, and have a long history with CLC which dates back to their high school years in Xavier and ICA, respectively.
Making themselves "sensitive to the signs of the times, and responding to the movements of the Spirit", both Aly and Elyse posted on Facebook their desire to help those in need, and their friends' response heralded the birth of their ECQ projects.

Elyse has been a member of CLC since 1994-1995, and professes that living the CLC way of life, choosing to be of service has become "natural/automatic" for her. She credits this to her CLC formation; the preferential option for the poor and the marginalized, answering the call of the times - these are deeply ingrained in her psyche.
She has a soft spot for the deaf, and wants to help heal their brokenness and make them feel whole. Her initial involvement with the deaf was as a life coach giving seminars on personality, character development, and leadership, and facilitating jobs for them. These days, she runs a cleaning and disinfecting business which is a social enterprise that develops housekeepers, employs deaf workers, and also benefits the deaf community.
Given the nature of her business, it is but logical for her to offer free sanitation services as a way to answer the call of the times. A thinking-out-loud post of hers on Facebook garnered a prompt response in the form of monetary pledge. The amount was enough to fund her sanitation project. She and her workers (which included the deaf) were able to sanitize the San Juan Agora market twice as well as the San Juan branch of Land Bank. It buoyed the spirit of the deaf, made them feel they were able to contribute during ECQ despite being disabled.
Additionally, Elyse joined a group of fellow ICA alumni who organized Task Force ICAn with the goal of providing PPEs (face shields, masks, suits, gowns) to hospitals. They solicited funds which they used to procure PPEs. Interestingly, they Initially bought the PPE gowns as an end-product. But after some challenges in procurement, an enterprising member decided to buy the cloth raw material, and sought fashion designers to make the gowns, which decreased the cost of the PPEs.
As Elyse is one of those in charge of the logistics, her office became the warehouse where they stocked the PPEs. For three weeks they delivered the much-needed PPEs almost daily, and as of May 18, around 40 hospitals have benefited from Task Force ICAn's donation.
Although they were winding down their PPE project as the ECQ was nearing its end, this group was also pooling funds from different batches of ICA alumni for another project -- creating a quarantine facility.

Aly Yap has several similarities with Elyse: he has been a CLCer since high school; he is also a member of Pyros community, and; his ECQ project, which he calls Food For Frontline Friends - a.k.a. F4 -- also started off with a post on Facebook.
Aly's family has a food catering business; since events/mass gatherings were strictly prohibited, ECQ would effectively put a halt to their operations. Mulling over the situation of their business as well as the larger community, Aly had an idea of providing meals to 3 QC hospitals nearby. He then asked his network on Facebook if anyone has contacts with QC hospitals, and also if anyone among them was willing to help chip in with the funds.
His network's response was overwhelming. Starting initially with Php178,000 on March 16, the donated funds totaled Php1,789,340 by April 30. There were at least 202 donors, mostly his former students over the course of 17 years (and counting) of teaching at the Ateneo de Manila's School of Management.
His results are impressive. For 45 days from March 17 to April 30, Aly and his staff continuously provided food day in, day out, serving a total of 39,000 meals to about 30 beneficiaries - mostly hospitals, plus a couple of grocery stores as well as Bangko Sentral ng Pilipinas. An average of 850 meals a day were cooked and delivered. Moreover, Aly provided not just meals to these hospitals but also PPEs: 800 surgical masks, 500 N95 masks, and 800 PPE suits.
If that does not sound tiring enough, Aly also joined Frontline Feeders PH ("a community-led initiative to provide nourishing meals to our dedicated medical center frontliners"). Over the course of two months, this group of doctors, restaurant owners and NGOs was able to provide 264,000 plus meals to 60 hospitals in Metro Manila and neighboring cities as a way of expressing "honor, respect and gratitude" to the medical frontliners.
*******************************
The Parable of the Mustard Seed
Reflecting on her experience, Elyse shares she received the grace of hope. In her thrust to find ways to help heal the world, such as enabling the deaf feel a sense of self-worth, she has also found her sanctuary in their peaceful and quiet world. Living out the CLC way of life, especially during these challenging times, her body is physically tired yet emotionally she feels very high. Similarly, when asked to contemplate on his efforts and accomplishments to help the frontliners, Aly says he is more than just satisfied -- his joy is overwhelming.
*******************************
Adversity, it's been said, reveals character. What is character? According to Dictionary.com, it is "the aggregate of features and traits that form the individual nature of some person or thing". The Lexico website (collaboration between Dictionary.com and Oxford University Press) defines it as "the mental and moral qualities distinctive to an individual". Lexico also traces its origin to the Greek word Kharakter, "a stamping tool" which gave rise to "distinctive mark".
In this time of adversity, let us hope that the character that is revealed of us is one where the distinctive mark of the face of Jesus Christ is stamped, He who is God and yet "inserted Himself among the poor and shared with them their condition." May it be a face of love, mercy and generosity to inspire hope in those we encounter.
*******************************
Light of the World

We would like to invite you to the CLCP ELECTION DAY ROSARY VIGIL on Monday, May 9, 2022. A Mystery of the Rosary will be prayed together... Read more

As the whole nation faces the National Election in May this year, we as one CLCP community will also elect our new National Leadership Community... Read more

We beg the Lord for the grace to be faithful to the mission to live faith that does justice for the building of His Kingdom in our beloved Pilipinas, bayang magiliw at lupang hinirang.... Read more

10 Commandments for a Well Discerned Vote

Each member is invited to join in posting every week one of the commandments from the Decalogue in their FB cover page... Read more